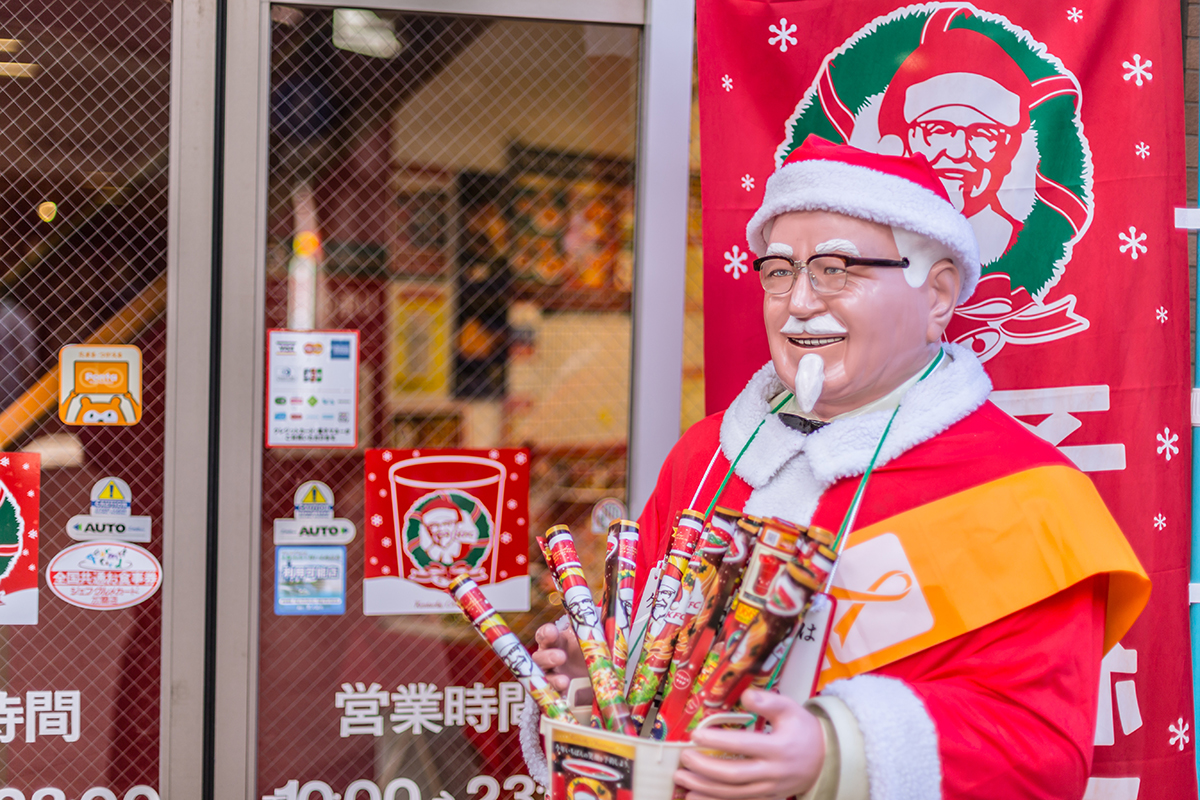 All around the world, there are hundreds of different ways to celebrate Christmas. From giant lanterns in the Philippines to demons roaming the streets scaring children in Austria, some of these customs can seem a little bizarre to outsiders.

In Australia, we usually celebrate Christmas with a barbeque, opening presents, lots of fresh seafood, a trip to the beach and then relaxing into the night. However in Japan, Christmas is celebrated very differently.

Christmas definitely isn’t a historical tradition that goes back centuries in Japan. In fact, it’s only since the American occupation in World War II that the Japanese people started to celebrate Christmas. As only one per cent of the population are Christian, Christmas is seen more as a commercial festival in Japan, and is not a public holiday.

Incorporating some fun Japanese traditions into your Christmas celebrations this year keeps the festivities interesting, and will encourage your family and friends to learn a little more about Japanese culture!

In Japan, it’s all about being polite, and the Japanese love buying each other gifts as signs of affection and respect. There’s a big focus on couples exchanging gifts, much more so than with family or friends. Christmas is the time to focus on the one person that is truly dear to you, giving you the opportunity to shower them with gifts. Television at Christmas time is filled with depictions of couples in love, or focuses on the storyline of the lonely singleton flying solo as they’re surrounded by couples.

The Japanese also send Christmas cards, just like in Western tradition, however this practice is usually more popular with younger people.

To bring a little bit of Japanese present-giving culture into your Christmas, buy gifts for your loved ones that you’d probably think are more focused on Valentine’s Day, such as chocolates, bouquets of flowers or jewellery. Or get creative and make cards for your workplace colleagues!

We all love Japanese food. Whether it’s sushi, sashimi, udon noodles, teppanyaki or funky Japanese desserts, it’s all delicious. However, if you’re thinking of having some ‘traditional’ Japanese Christmas food on your table this festive season, you’ll actually be looking to buy… fried chicken and cake!

Japanese people LOVE fried chicken. Not only do they start pre-ordering it for Christmas as early as November, but all throughout the year KFC stores often have queues down the block of people waiting in line for their juicy, salty, battered fix. This obsession started in 1974, when a group of foreigners travelling in Japan went looking for turkey for Christmas. Not finding any, they settled on the nearest thing they could find, and KFC jumped at this gap in the market. They launched the famous advertising campaign ‘Kurisumasu ni wa kentakkii!’ (Kentucky for Christmas!) and the rest is history. KFC now offers full Christmas dinners that include fried chicken, Christmas cake and salad for 4000 yen (or $35 USD).

In terms of dessert, the classic Japanese Christmas cake is two or three layers of sponge, covered in sweetened whipped cream and then decorated with edible Christmas ornaments, chocolate, glace cherries and chocolate shavings. The first Christmas cake in Japan was sold in Fujiyama in 1910, with the target market being the foreigners living in the area. Back then, it was more similar to a traditional British fruitcake than the cake we know today. After World War II, a period of economic growth was combined with increased Western influences, and the cake became a Christmas favourite, seen as a monument of success and prosperity.

When it comes to homes and public places being adorned with decorations at Christmas time in Japan, one could be forgiven for thinking it’s pretty similar to how Western countries do it. At the end of the year, cities in Japan are covered in twinkling lights, with large-scale illuminations projected onto the sides of buildings to delight viewers’ eyes. In recent years, many businesses have opted for environmentally-friendly LED lights, as they use less electricity than traditional varieties.

However, many Japanese homes are too small for the traditional large Christmas trees that are displayed in Western homes. So, the Japanese usually place mini Christmas trees on tabletops or windowsills. As these trees are obviously too small to put presents under, Japanese people will often buy small Santa figurines called ‘Fuchiko’, with over 6.5 million of the trinkets being sold through vending machines. These little toys are hung on cups, mugs and bedframes to spread Christmas cheer and let Japanese children know that Santa has been!

So if you’re wanting to decorate your house with a bit of a Japanese influence this Christmas time, opt for a smaller tree and see if you can purchase a few Fuchiko figurines on eBay. You could also use buddhas, bonsais, bento-themed snacks neon illuminations to really give your home that Japanese feel! Here are some more great ideas for decorating with a Japanese Christma twist.

At Kobe Jones, we absolutely adore Christmas. We’re a highly innovative, stylish and modern chain of Japanese restaurants. Our passion and love for Japanese tradition and culture is something we wish to share with all of our customers, especially around Christmas time. If you live in Melbourne and fancy a Japanese-style Christmas experience this year, make your booking with us now!