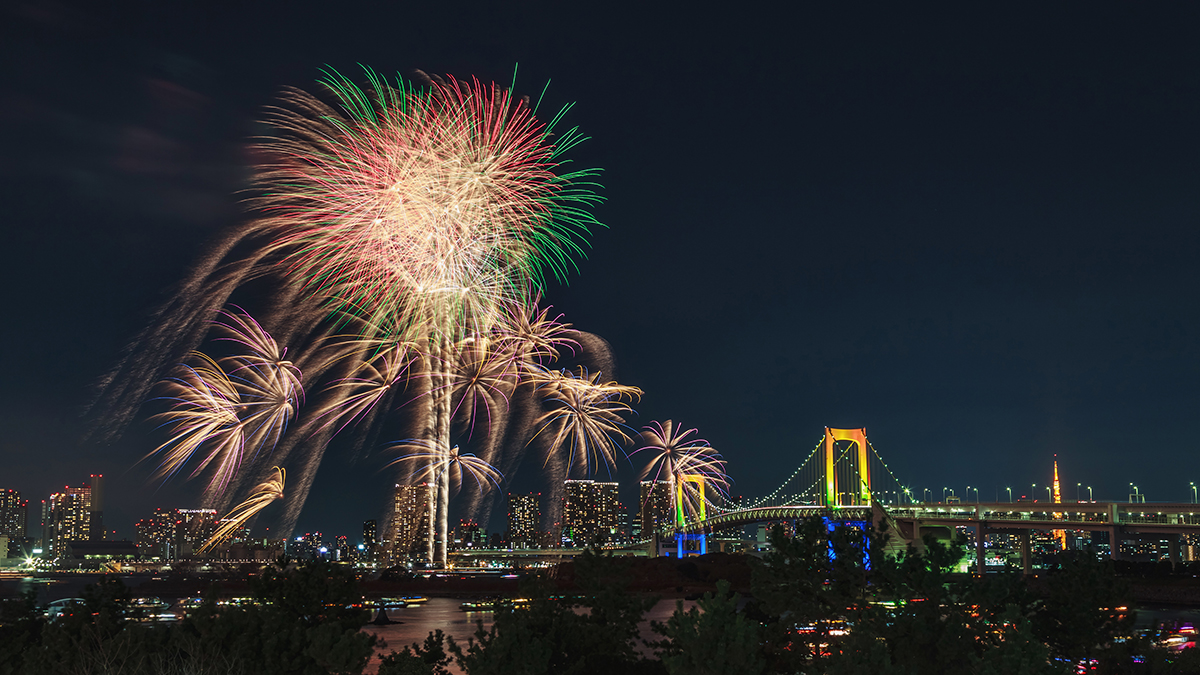 When people in the Western world think of New Year’s Eve, we mostly think of getting glammed up, enjoying champagne and canapes, and ringing in the New Year by counting down the seconds to midnight with family and friends. However, the end of the year is celebrated in many different ways all over the world. In Japan, people usually celebrate New Year’s Eve in a quieter fashion than Australia. But there are many interesting and unique traditions that accompany the evening. 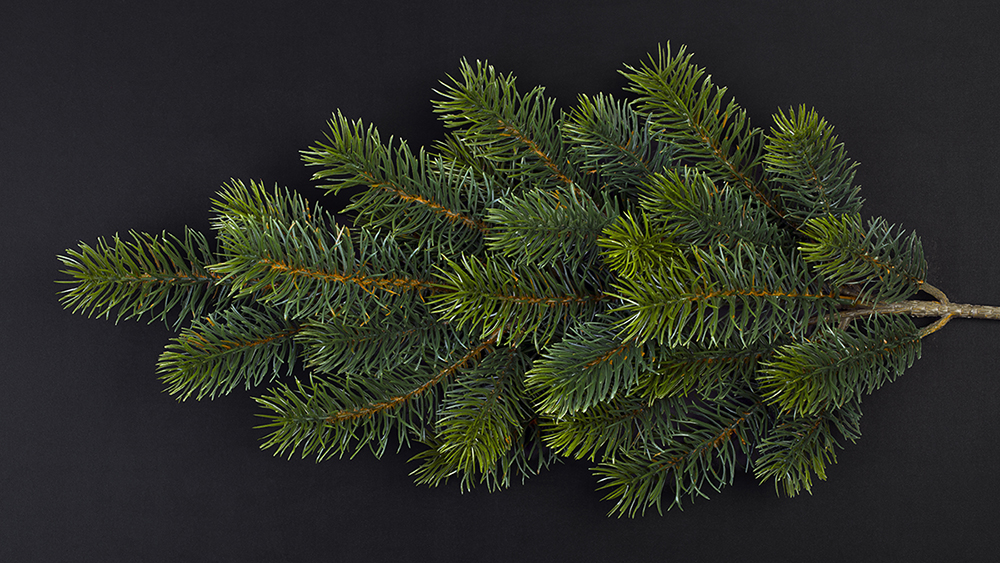 Japanese people take great pride in their homes and love decorating them with items that symbolise different holidays. For New Year’s Eve, many Japanese households will decorate their homes with branches of pine trees, symbolising longevity and good luck coming into the New Year. They may also use fruit such as mikan (delicious Japanese mandarins), or red berries of a plant called senryo (literally meaning ‘a thousand coins’) which are symbols of wealth and prosperity. The Japanese also believe that it’s very important to enter the New Year with a clean home, so doing a deep clean is absolutely necessary in the days leading up to the holiday. 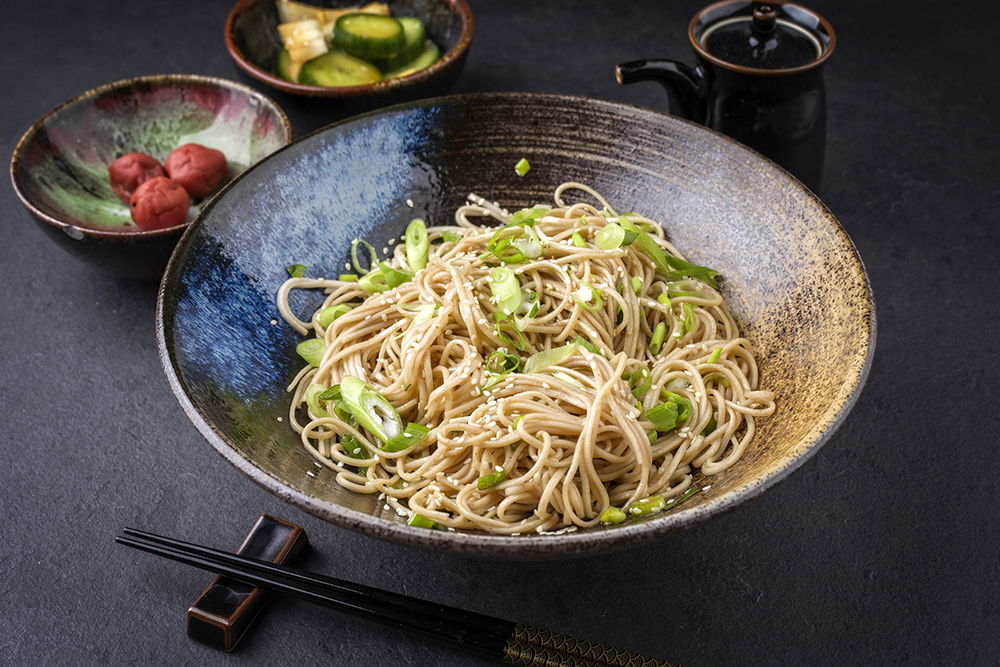 Many shops and restaurants are closed on New Year’s Eve and New Year’s Day in Japan, so families often take the time to cook a meal at home together and just enjoy each other’s company. Toshikoshi Soba is a Japanese soba noodle dish that is typically eaten on New Year’s Eve. Toshikoshi translates to ‘year-end noodles’, with the tradition starting as the ease with which the soba noodle can be cut represents the ease with which people should cut away the bad luck that has accumulated in their lives throughout the past year. The most popular time to eat Toshikoshi Noodles is right before the beginning of the New Year, in the late hours of New Year’s Eve.

Hatsumode festivities at shrines and temples 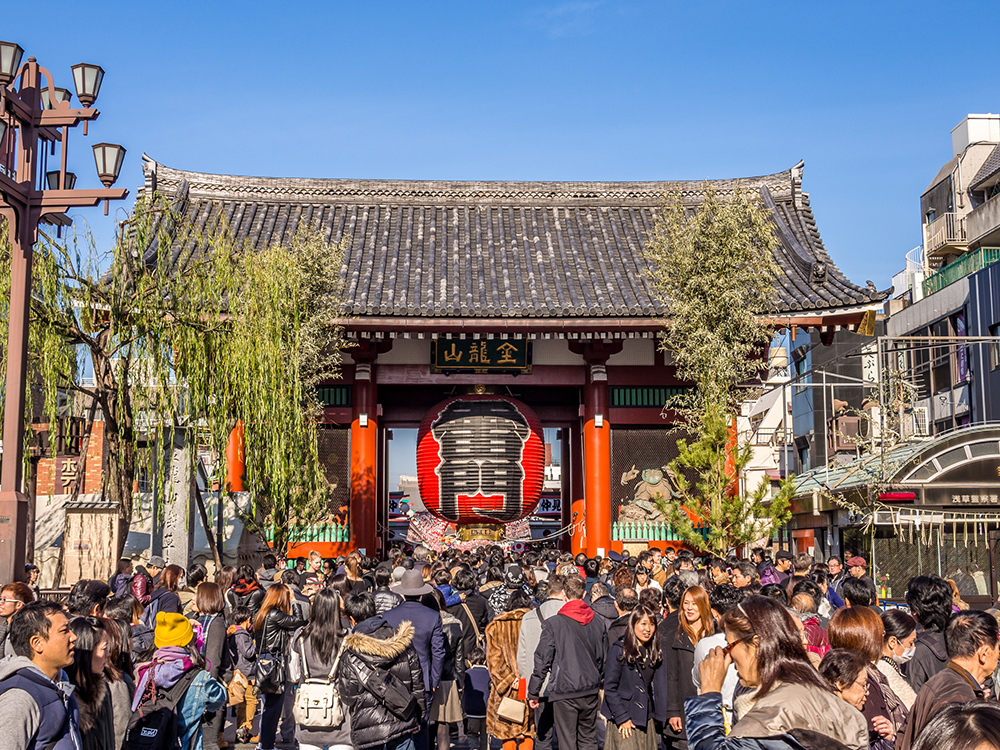 Hatsumode festivities are held at basically every shrine or temple in Japan on New Year’s Eve, New Year’s Day and the couple of days following, so if you’re visiting Japan at this amazing time of year you can join the crowds to see this tradition take place.

At the more popular shrines and temples, you can enjoy a festive atmosphere with food stands, people lining up to pray in the main hall, purchasing lucky charms for the new year and disposing of their old lucky charms from last year. If you go to a temple around midnight on New Year’s Eve, you’ll be able to enjoy the magical sound of the temple or shrine bell ringing out into the night to signify the New Year.

Some of the most popular shrines include the Meiji Shrine in Tokyo, the Fushimi Inari Taisha shrine in Kyoto, the Sumiyoshi Taisha shrine in Osaka or the Tsuruoka Hachimangu shrine in Kamakura. They attract over a million visitors each year for the festivities, so you can expect to line up for over an hour to enter the main hall. It’s worth it though!

Zojo-ji is an ancient temple situated right at the foot of the Tokyo Tower. It dates back to 1393, having miraculously survived every war unscathed. The temple grounds have a really lovely, peaceful atmosphere, and really start to get crowded around 10pm on New Year’s Eve. As we’ve mentioned before, people flock to Zojo-ji to do ‘hatsumode’, which is said to cleanse the body of the 108 worldly desires (according to Buddhist belief). The arrival of the New Year is brought in with a monk ringing the bell 108 times – it’s a truly beautiful sound!

If you’re after something seriously fun and a little more lively for New Year’s Eve, then the countdown in Yokohama is your place to be. Yokohama is one of the few places in Japan that celebrates in a more Western style, with fireworks, parties and lots of champagne! The many restaurants and clubs in the vicinity all have New Year’s Eve events, so you can enjoy the bustling atmosphere and some amazing food too. If you really do end up partying till dawn, we’ve heard that there’s hardly a more beautiful scene than the first sunrise of the year dipping a soft orange light over the mountains of the Boso Peninsula behind Yokohama. Stunning!

So, whether you’re a party animal or a traveller wanting to experience a quieter, more traditional New Year’s Eve, you’ll find a favourite way to celebrate in Japan. If you want to celebrate New Year’s Eve Japanese-style in Australia, why not book a function at a Kobe Jones restaurant? We have a brilliant menu of fresh, funky and traditional Japanese food in our different styles of venue; whether you prefer teppanyaki or a sit-down meal. Enquire about booking a function with us here.