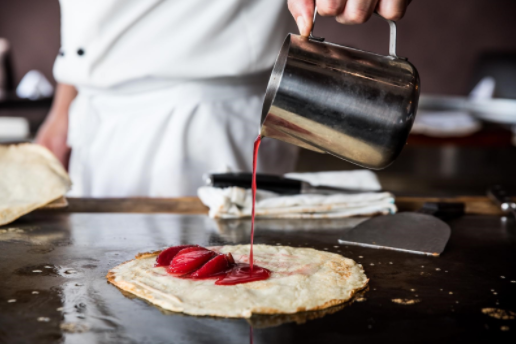 When you think of Japanese cuisine, savoury dishes like ramen, sushi and udon noodles might come to mind. But you may not realise that there are also some delicious Japanese dessert recipes to out there – like Kobe Jones’ own Ume recipe, which was featured recently on Tasty Meals at Home.

Many Japanese desserts are handcrafted and elaborately designed. Some of these more intricate and delicate treats are traditionally served in a Japanese tea ceremony, and are called Namagashi. Here are a few other recipes to try your hand at if you want to sample some of the delicious desserts Japan has on offer. 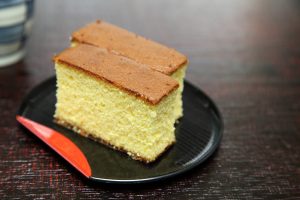 Castella is Japan’s version of the sponge cake and a specialty of the Nagasaki prefecture. Introduced by the Portuguese in the 16th century as a Portuguese dessert called Pao de Castela, the rarity of sugar at the time made it a true dessert for the Japanese aristocracy.

Castella is a simple, no-fuss cake, made with flour, eggs, sugar and starch, and often with a layer of hard sugar on one side. A great castella has a bouncy, yellow sponge and a dense texture.

It’s usually eaten as-is, without a topping, though modern castella can be flavoured with matcha (powdered Japanese green tea). Sweeter versions of castella are made with a little honey or brown sugar added to the mix. Traditionally, it’s sold sliced in a rectangle shape, either in individual packets or in a long thin box. But it can also be found molded into cute shapes and garnished with designs made from powdered sugar.

Since sugar hit grocery shelves in Japan, Castella has become one of the country’s most famous desserts.

Give this recipe a go: Castella Kasutera Cake by Not Quite Nigella 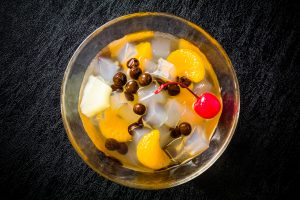 Anmitsu is a delicious, fresh, traditional dessert. It’s definitely considered an old fashioned dessert in Japan, dating back over a hundred years to the Meiji-era, though it remains popular all over Japan today.

It’s made with anko (a sweet paste made from mashed azuki beans) and small agar cubes (agar is a clear, white jelly with little flavour). It’s a favourite summertime dessert, often served with fresh pieces of fruit and a sweet, black syrup called mitsu.

There’s no one way to serve anmitsu, with the core ingredients (anko and agar) often joined by mochi, chestnuts, boiled peas (yep, Japanese desserts can have savoury ingredients too!) and sweet beans. Anmitsu is often served with whipped cream or ice cream, traditionally green-tea-flavoured.

Try this recipe: Fruit Cream Anmitsu by The Delectable HodgePodge 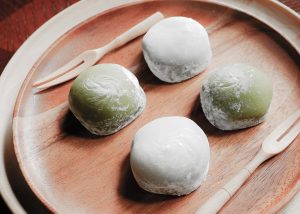 You can’t talk Japanese desserts without mentioning mochi. Mochi is a fundamental ingredient to many Japanese desserts, though it can also be served on its own. Mochi is a sticky rice cake that, like many Japanese foods, can be served in either sweet or savoury dishes. It’s made from sweet rice, boiled, mashed and pounded until it becomes a paste, and molded into different shapes.

Mochi ice cream became popular in the 80’s. Tiny balls of ice cream are wrapped in mochi and usually dusted with mochiko (powdered sweet rice) or corn starch to make them less sticky.

Mochi could also be toasted and served with a sweet topping, like kinako (soybean powder). Daifuku is a little pocket of mochi with a sweet filling, another popular Japanese dessert.

Try this one out: Daifuku Mochi by Just One Cookbook

Coffee jelly is exactly as it sounds – a jelly made with strong, black coffee and gelatin, and usually topped with vanilla ice cream or whipped cream. You’ll find coffee jelly in old cafes in Tokyo – it’s a dessert that hasn’t become popularised in the Western world. Part bitter and part sweet, coffee jelly cubes are also often added to milkshakes for extra flavour.

This melt-in-your-mouth treat is easy to make at home – it’s a matter of dissolving powdered gelatin in a pot of hot coffee, pouring it into a tray and allowing it to cool and set in the fridge. The hardest part is waiting for it to set before you can eat it! 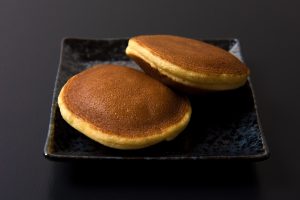 Dorayaki takes two already-delicious castella pancakes and sandwiches sweet anko filling in between them. It can also be filled with matcha, chocolate, chestnuts or whipped cream.

Like many others, dorayaki is an old-school Japanese dessert. Its popularity skyrocketed when it was written as the the favorite food of ‘Doraemon’, a popular Japanese animation character.In the Kansai region, Dorayaki are called Mikasa, after their resemblance to the slopes of Mount Mikasa.

Try this recipe: Fluffy and Soft Dorayaki by Rice and Flour

There’s no better accompaniment to a Japanese dessert than green tea. Green tea is a central part of Japanese culture and can be served in many different forms, like in ice cream or brulee.

Want to try a delicious green-tea-inspired Japanese dessert for yourself? Kobe Jones serves a dish called Flaming Anko – and like the name suggests, it’s on fire! Flaming Anko is a green tea crème brulee with red bean, served flaming to the table for a caramelised finish.