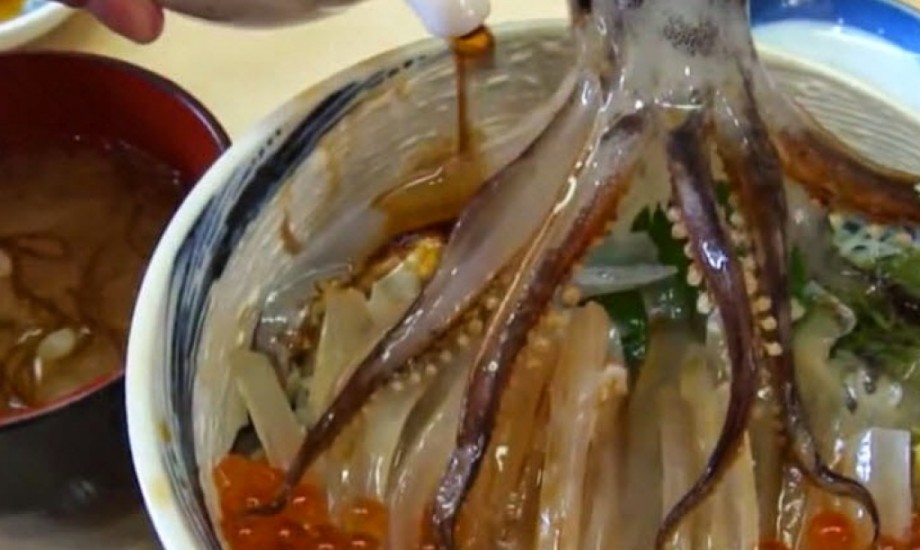 From poisonous fish, to horsemeat sashimi, boiled locusts and dancing squids, Japanese food constantly breaks the rules to create playful dishes that not only taste great, but look amazing. Here’s a few new foods to add to your bucket list! Let us know which of these 12 you’ve tried, and what it was like.

Fugu is one of the most infamous Japanese dishes. Made from the pufferfish, this dish can be fatal if you have been erroneously served part of the fish’s skin or organs. Due to the dangerous nature of the dish, it is only prepared by qualified fugu chefs who know how to carefully cut and serve the dish without making patrons seriously ill (it takes years to be a trained and qualified fugu chef!).

Soy sauce has been given a slightly crunchy twist with this Japanese delicacy. Made from boiled locusts stewed in a sweetened soy base, this insect based dish is popular around rural areas in Japan, including the Gunma, Yamagata and Nagano districts. It’s certainly a creative way to eliminate these crop-eating pests.

This dish may make you squirm. In fact, the dish itself squirms too. Also known as the dancing squid, ikizukuri features a very dead squid being brought back to life with soy sauce. Well not actually brought back to life, but once the soy sauce is poured over the dish you’ll be amazed to find that it will start moving about. This is due to an automatic response to the salt in the soy creating electrical commands in the squid’s muscle cells.

When we think of slugs, we usually think of the garden. However, namako is a succulent sea slug dish that has been described as not quite vegetable and not quite meat. This unique in-betweener is one of the most interesting dishes you may ever eat.

If you’re a beer drinker this dish is said to be the complement the beverage perfectly. A popular bar snack in Japan, hachinoko is made from deep fried bee larvae. Fried in soy sauce and sugar for a nice sweet crunch, pub peanuts will never look the same again after you’ve tried this truly interesting dish.

Are burgers the new black? All reports say this little treat tastes great, even though it may look a little bit… goth. Burger King Japan unveiled the Kuro Pearl Burger, complete with two black bamboo charcoal burger buns, black cheese and blackened (with pepper) beef patties. So, if you’re ever in Japan and nothing will suffice but a good old fashioned fast food burger, at least head to Burger King and make the experience as Japanese as possible.

Chicken, beef and fish are meat staples for many countries, but what about horsemeat? In Japan, ‘basashi’ is a popular dish and speciality on the island of Kyushu. Likened to sushi, the horse meat is served with garlic or Japanese horseradish (wasabi). The raw pieces can also be dipped in soy sauce for extra flavour.

If you’re on a health kick, these crackers are for you! Senbei is a Japanese style rice cracker. The catch? It has had a specific type of wasp added to the mixture before cooking to give it flavour and added health benefits. Created by a passionate group dedicated to the digger wasp, they teamed up with a local cracker maker in Omachi, Japan. The wasps are believed to contain a high percentage of protein: whilst steak contains 20%, the digger are reported to contain a substantial 81% protein! Would you put down the protein shake and pick up some wasp senbei?

Just like the smelly cheeses of France, natto has a particularly pungent smell that some people just can’t… appreciate. And if the aroma doesn’t challenge you, the strong flavour and slimy texture just might. But once you do fall in love with this dish, you’ll understand why this fermented soybean and soy sauce dish is a traditional favourite in Japan that many love to eat on a regular basis.

This egg dish is prepared in the active sulphur vents found in the Hakone region of Japan, so it can be a little hard on the nose. Each egg is hard boiled in the hot springs, and as a result of the geothermal heat and volcanic gas, the egg turns black as the sulphur encases the shell. This also infuses the egg with distinctive sulphuric smell.  They are however, rumoured to be the secret to health and longevity!

Roe, or fish eggs, are no stranger on our beloved sushi. However, shirako, is a little bit more of a delicacy. Shirako is fish sperm sacs, and the term is translated to mean ‘the white children’ in Japanese. Shirako melts on your tongue, similar to butter, with a soft and creamy texture.

So, while some of these dishes can send you to an early grave, are made with critters you would otherwise avoid at all costs, or make you cover your nose in polite company, all are actually quite pleasant to your tastebuds! Japanese cuisine is well renowned for its beauty, simplicity and umami, so while some of the foods above may seem a little quirky, they all embody the tradition and integrity in this wonderful fare.

For yummy (and edible!) Japanese Cuisine in Sydney and Melbourne, visit Kobe Jones.