Since most sushi or sashimi includes raw seafood ingredients, it is essential to know how to select the correct fish, and how to keep it fresh. Proper food-safety precautions are the key to creating good sushi, as this will minimise the risk of foodborne illnesses associated with eating raw fish.

Raw fish is not something to be afraid of. Virtually every fish or sea creature is edible, it’s just that not every fish can be eaten raw. Knowing which sources are safe is the best place to start when choosing your sushi ingredients.

Other fish that are commonly used include: squid, gizzard shad (kohada), mackerel, sea bass, porgies, and snapper. However, these typically need to be treated before being eaten raw.

As a general rule, it’s worth noting that fish farmed in the USA, Norway, Britain, New Zealand, Canada or Japan should be safe to eat. These countries have strict standards in regards to cleanliness and are typically free from parasites.

Parasites are a fact of life when it comes to meat of any sort, that’s why we tend to cook most of our foods. Parasites of concern are cod worms, seal worms, and tapeworms. Cod worms are typically found in cod, haddock and hake, hence why you never see these fish on a sushi menu. Seal worms can be found in salmon, jacksmelt and herring, but can be easily removed. Tapeworms are the nastiest of the creatures and are found in freshwater fish, such as wild trout or largemouth bass. Never, ever eat these fish raw.

What is sushi-grade fish? 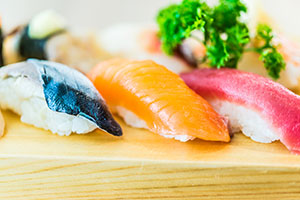 ‘Sushi-grade’ fish is the term given to fish that shows it is safe to prepare and eat raw. Sushi-grade fish is caught quickly, bled upon capture, gutted soon after, and iced thoroughly. Known parasitic fish, such as salmon, should be frozen at 0°F for 7 days or flash-frozen at -35°F for 15 hours. This will kill any parasites, making the fish safe for consumption.

It may sound strange to eat fish that’s been frozen raw, but most sushi restaurants use fish that has arrived heavily iced. As nice as it would be to think that the sashimi you’re eating has come off a boat just hours before, the reality is that this is rarely true. The good news is though, providing it’s of good quality, fish that’s been frozen can still taste great.

There’s another benefit to using frozen fish when making your own sushi, and that is cost. Frozen fish is far more economical, plus it means you can keep it on hand for whenever you get a sushi or sashimi craving. For best results, try to look for individually quick frozen (IQF) products, and unwrap the fish before placing in the fridge to thaw.

If you’re choosing to use fresh fish, always use your nose before selecting. If the fish smells funny, don’t eat it. Fish should have a light, natural fishy smell and should not be at all offensive. Ideally, you want to buy fish that is still swimming in a tank when you select it, such as fish found in specialty seafood markets. You also want to buy in season, as certain fish have particular harvesting seasons.

Eating raw fresh fish is all about timing. If you buy fresh fish, use it that day. Don’t stock up a day in advance, and always consume within two days. If the fish has cloudy eyes or feels mushy to touch, it’s best to avoid it.

It’s worth noting that colour is not directly correlated with freshness, as many farms use colouring processes to make their fish look more appealing. The bright red colour of tuna sometimes found in a fish store doesn’t have to mean it’s fresher than the chocolatey-brown tuna, it simply means that it went through a process called ‘cold smoking’, in which the tuna is exposed to carbon monoxide to create a red finish. The same goes for bright pink or orange salmon, which could be a result of food colouring pellets being in their fish food. Be careful that these processes haven’t been done to disguise older-than-should-be fish.

When buying shelled fish, avoid any with broken shells, as once broken they can begin to spoil quickly.

Follow these tips and you should be on your way to creating a delicious homemade sushi!