It’s no secret that the world is in the midst of a Japanese cooking bubble. Over the past few years, through the emergence of social media and the popularity of restaurants such as Kobe Jones, Japanese cooking is well and truly on the radar of many home cooks. From creative bento boxes and sweet potato stir fry, to japanese milk bread and three cheese tarts, Japanese recipes have home cooks hooked. The favourites, however, are all about the seafood.

Japan is surrounded by a lot of water and a lot of fish, therefore it makes sense that the Japanese love their seafood recipes. Well known for their fishing industry, they’ve got access to some of the best and freshest fish in the world. Why not make the most of it with recipes such as these… 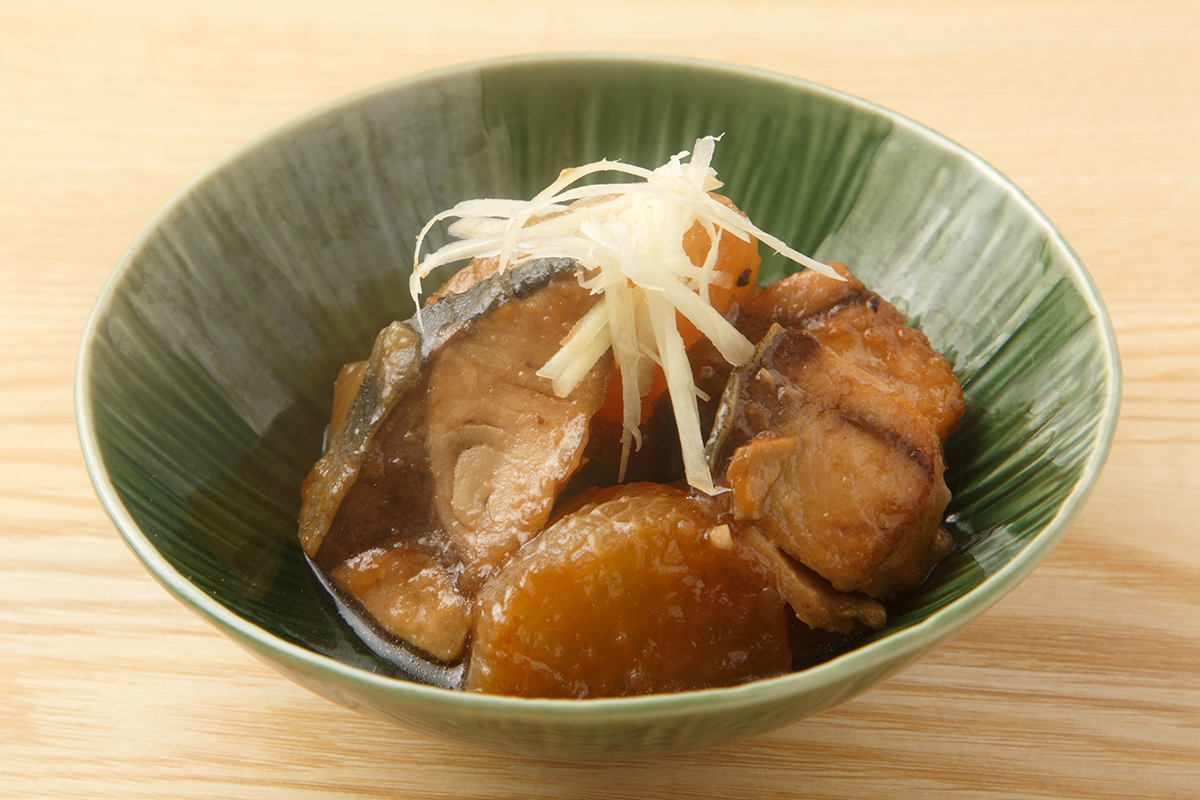 Buri Daikon a is favourite winter dish consisting of cooked yellowtail and Daikon radish in a seasoned broth. Buri is the oldest and biggest of the yellowtail (which changes names as it grows) and is at its fattest during the winter. This makes Buri sensationally flavourful all season long and when paired with Daikon (also at its most flavoursome in winter), the taste is amazing. Enjoy this Buri Daikon recipe when the weather is cold and you want to warm up. There’s no better way to satisfy your tummy and say goodbye to chills.

Ebi Fry is Japanese shrimp breaded with flour, egg and Panko crumbs that’s then deep fried. Popular in many Japanese restaurants, it’s a family-favourite dish and one that everyone will love. Ingredients can be easily found and whether you use fresh or frozen fish, it’s super tasty. One tip for preparing the shrimp is to make them relatively straight and then, while they cook, make diagonal cuts on the inner side. This will cause them to bend the other way, breaking its inner muscle. Try this Ebi Fry recipe with a tasty homemade Japanese mayonnaise.

A fried fishcake from Kagoshima, Japan, satsuma age is surimi (ground fish) and flour mixed to make a compact paste that is solidified when fried. Also in the traditional paste is salt, sugar and other spices. Combined with onion, vegetables, squid, octopus, shrimp and any other seafood you choose, satsuma age makes an excellent snack or accompaniment to imo-shochu, Japanese spirits distilled from sweet potatoes. This recipe will make around 12 cakes. 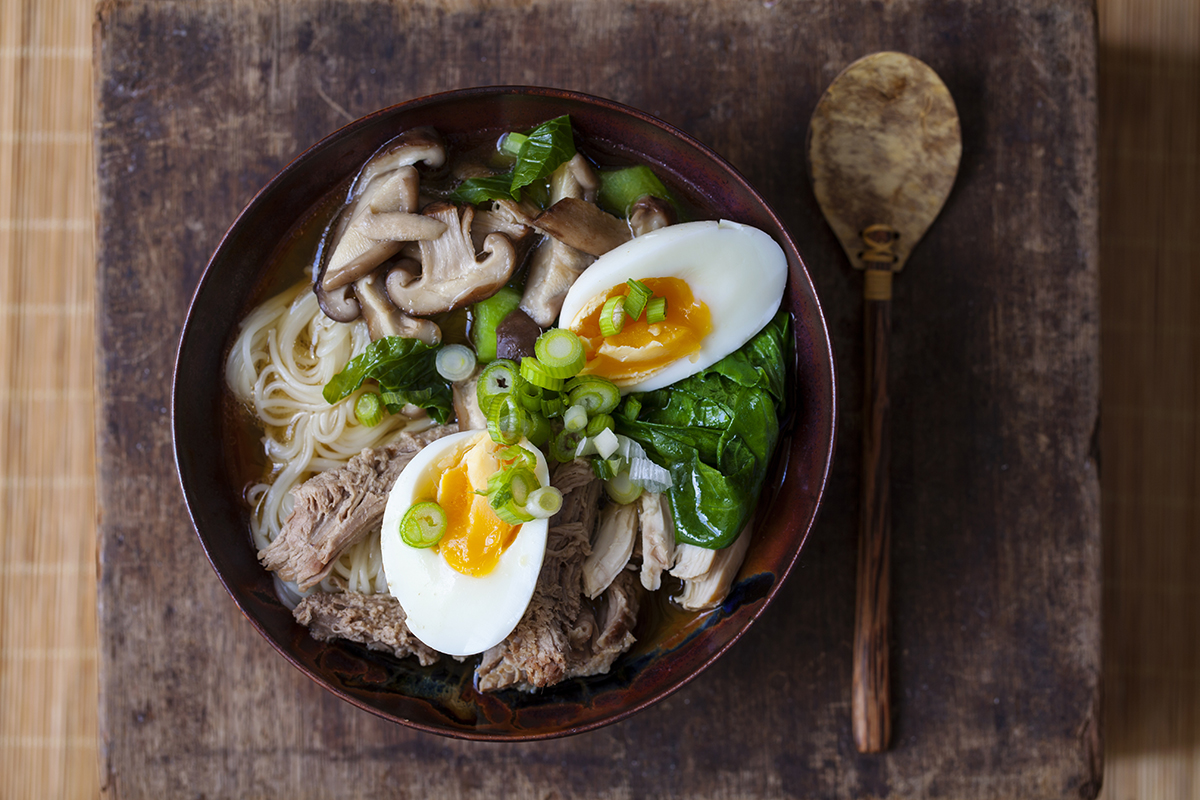 This umami-filled flavoursome soup can be customised to suit your own preferences, but to start you off, try this delicious recipe. Warming and filling all year round, it’s easy to make and oh so delicious. Try it for lunch and you’ll have plenty of energy to see you through to dinner time. Miso Ramen was first made popular in the 1960s, and while Ramen noodles might originally be Chinese-style, Miso Ramen are today considered the pinnacle of Japanese noodles. The fishcakes (available at most Asian markets) are a nice touch.

Avocado and tuna is a winning combination and can be enjoyed as a side or as a light meal itself. Present it in a hollowed avocado skin for a creative Japanese touch. Fresh, tasty, and full of protein and good fats, this salad contains just six ingredients and is best served alongside a crusty piece of bread.

Japanese spices give this exotic seafood dish an edge that’s bound to get your barbecue guests talking. To prepare the squid, pull out the tentacles and removed the attached wings and guts. Cut open lengthwise and remove the bone before adding to your marinade and grilling. While you cook, chill some Kizakura Yamahai sake in the freezer. The light body of this rice wine will beautifully match the weight and texture of the squid while bringing out its intense flavour. 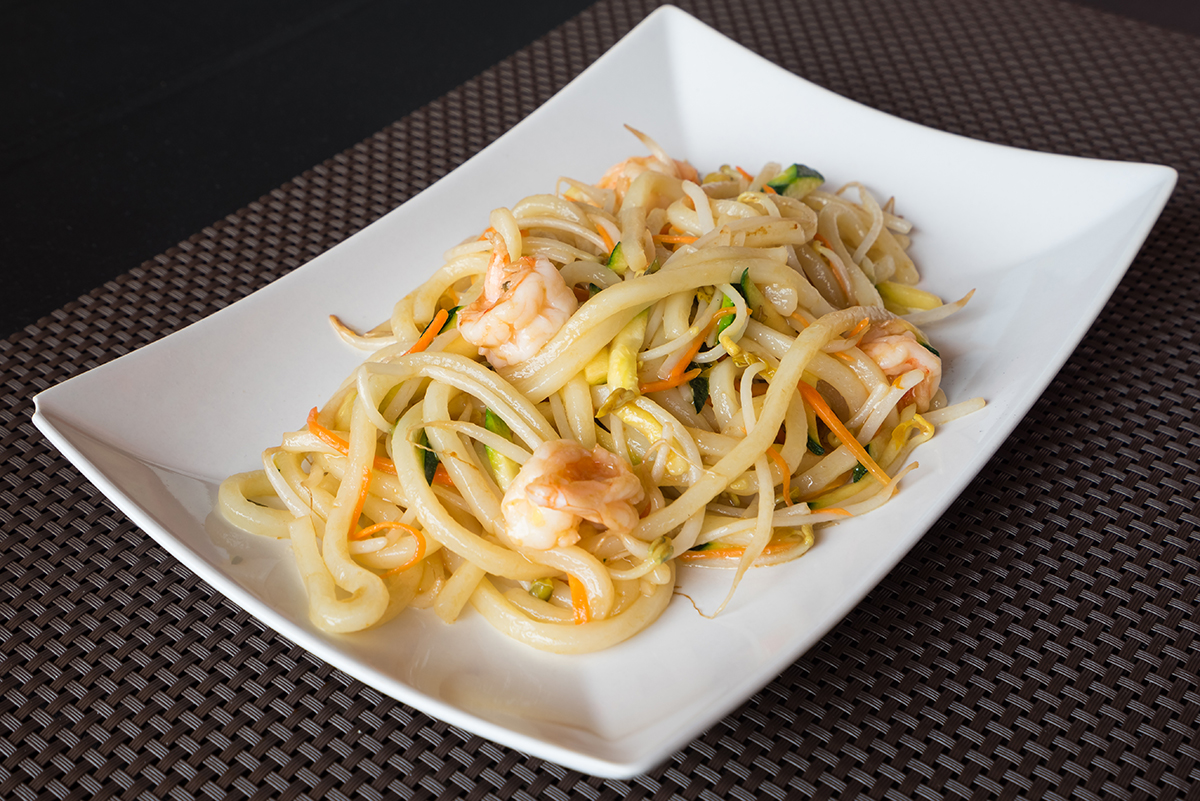 If you’ve been to Japan, you’ve likely tasted stir-fried yakisoba, a classic Japanese stir fry dish with pork and vegetables. This Yaki Udon Stir Fry Noodles is very similar, but finished with prawns, scallops and chikuwa fishcake, it trumps the Japanese favourite. The thickness and chewiness of the udon noodle really adds to the authenticity and flavour of this dish.

Choose a nice rice seasoning from your local Asian grocery (we like ones that use bonito, dried seaweed and sesame seeds) and add half a cup to a food processor along with half a cup of wasabi peas. Pulse to create a crumb-like powder and then use this as a coating for your beautifully fresh tuna steaks. Simply attach the crumb with miso paste and then fry briefly with a little splash of soy sauce and mirin. Serve with a side of watercress. 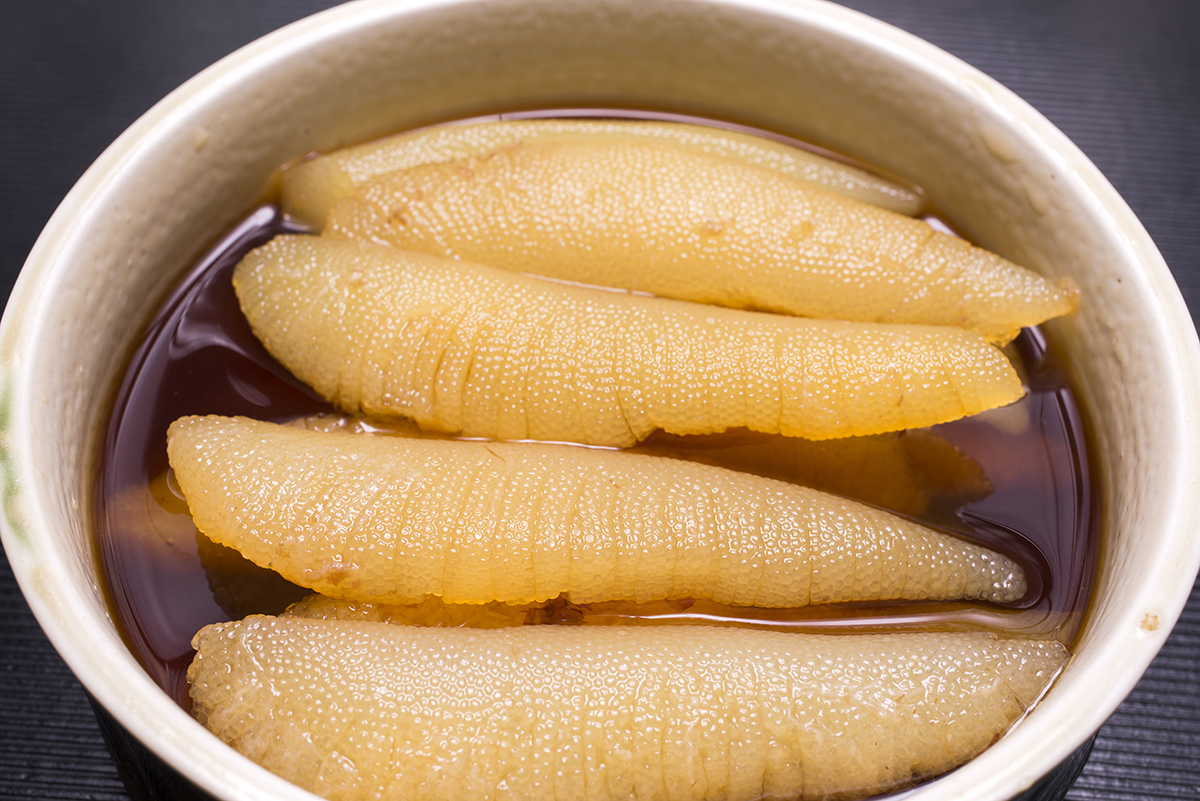 Kazunoko is salted herring roe that’s been marinated with seasoned dashi. Part of the traditional Japanese New Year feast, it’s considered a big celebration dish alongside sweetened black beans. The dish has special meaning, with the tightly bounded eggs symbolising children and prosperous family. It is rather salty and it’s an acquired taste, but it’s definitely worth a try on your next special family occasion.

Tako means ‘octopus’ in Japan and it’s incredibly popular. Similar tasting to squid, it’s just like calamari. Remember this if you find yourself getting grossed out by the idea of octopus.

This octopus salad recipe is very easy to make and provided you purchase quality octopus, we’re sure you’ll love it. Slice ingredients thin, toss everything together, and you’re done! 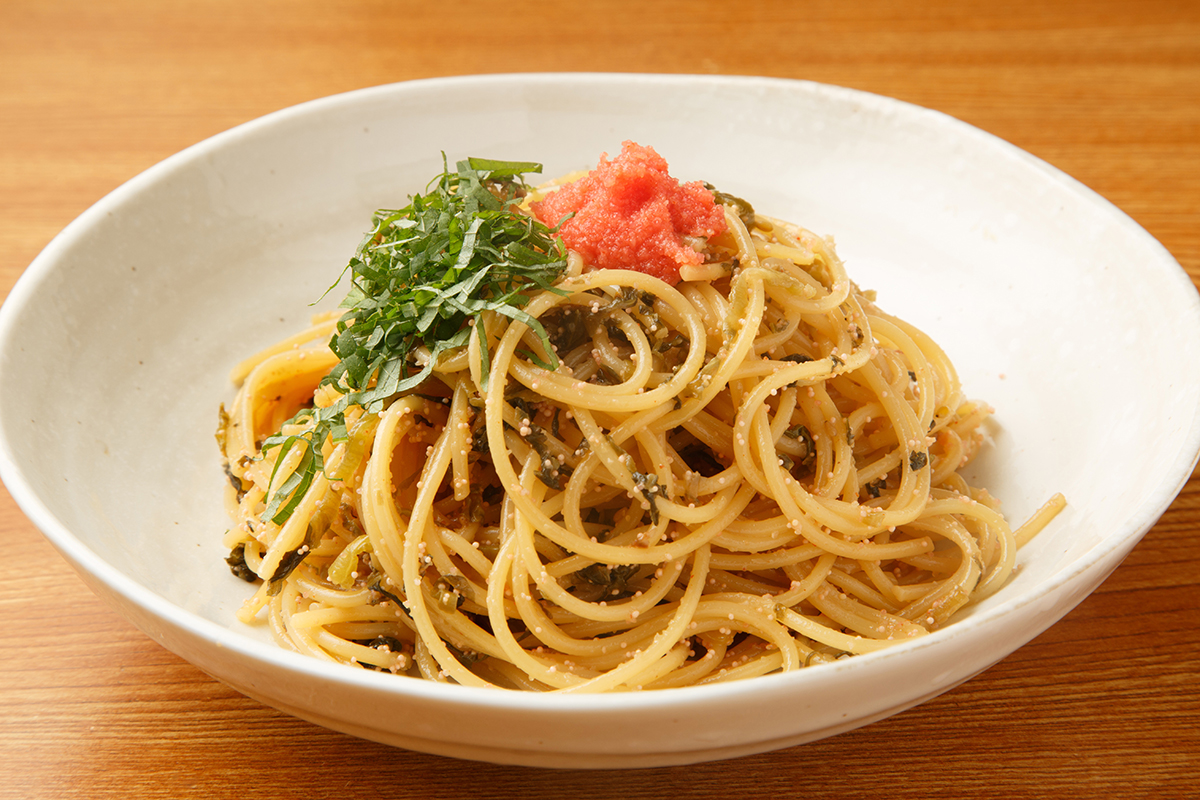 Mentaiko (or pollock roe as it’s otherwise known) is a popular culinary ingredient in Japan and is made with a variety of flavours and colours. Mixed with butter or mayonnaise, it’s commonly used as a sauce for spaghetti. Thin strips of nori are then sprinkled on top for what is considered one of the most eaten dishes in Japan.