The Ultimate Guide to Sushi and Sashimi

Sushi and Sashimi are two of Japan’s most well-known cultural exports.

(literally translated to English as as ‘sour rice’) Refers to small morsels of meat, fish or vegetables served alongside Sumeshi (酢飯, vinegared rice). While fish is commonly used in sushi and can be either raw or cooked, there’s no actual requirement for raw fish (or any fish at all) within sushi.

(translated as ‘pierced body’) refers instead to thin-sliced raw meat served without rice. It’s commonly served alongside a variety of sauces, condiments and side dishes, and involves sourcing the freshest fish for maximum flavour and beautiful texture.

Is the preferred form of Sushi within Japan. Instead of being wrapped within a seaweed roll, and consisting of multiple choices for ingredients, Nigiri is almost always raw seafood served over a small wedge of rice.

The art of Nigiri Sushi making is widely regarded as only for experienced practitioners. As the dish is usually laid bare of anything other than the fish and rice, the taste must be achieved with a bare minimum of ingredients, and the presentation and assembly are held to an impeccable standard.

Nigiri is comprised of the Sumeshi (sushi rice) and Neta (topping). Some of the most common Neta include:

In accordance with its name, Nigiri Sushi is first prepared by hand-shaping a traditionally half-crescent ball of Sumeshi which must fit on two fingers of the chef’s hand, upon which a thin strip of carefully prepared meat is draped. For certain particularly slippery proteins, a thin strip of Nori, the same seaweed used within Sushi rolls, is used as a binding agent. As a final touch, certain garnishes, such as ginger or wasabi, may be served alongside.

Nigiri Sushi prides itself upon simplicity and taste, and when correctly prepared is considered, alongside Sashimi, to be one of the premiere facets of Japanese cuisine.

Is more commonly encountered in the West than in Japan, contains a much larger variety of ingredients, and is what most people in Australia will recognise as Sushi.

The main distinguishing feature of Maki Sushi is the use of Nori (edible seaweed) rolls to wrap and contain large cylinders, which are cut into smaller sections and served in finger-food sized portions.

Another distinguishing feature is the expanded range of options for ingredients. While Nigiri commonly prides itself upon extracting the maximum potential from simply raw fish and rice, Maki opens itself to combining many types of meats, both cooked and uncooked, with vegetables and garnishes. You’ll commonly experience anything from avocado to pickled vegetables within.

Maki is commonly seen in take-away and easy-eating establishments: it’s quicker to prepare, as unlike Nigiri, each topping doesn’t have to be individually placed, and is much more easily transportable. In Japan, it is commonly encountered at parties or gatherings, and compared to Nigiri or Sashimi, can be prepared without the expectation of years of experience.

Despite having the -maki suffix, is a specialty type of Nigiri Sushi. It refers to a specific method of presentation, where Nori (edible seaweed) creates a container in which Sumeshi, and finely chopped or unwieldy ingredients that would otherwise be too clumsy to eat, are placed.

Gunkan Sushi derives its name from the traditional presentation style, where the Nori is shaped in an oblong fashion, and often shaped or, with the help of garnishes, forms a bow and stern.

The proteins within Gunkan Sushi are of a much wider variety than most other Sushi types, as there’s no danger of them falling out while trying to eat them. While even Maki Sushi usually has tofu or meat, Gunkan quite often contains elements more typical of other parts of Japanese cuisine, including:

Unlike most traditional forms of Sushi, which originate around the 14th Century, Gunkan is a relatively new dish, having been created in the 1940s in Tokyo.

Is Japanese Sushi more akin to a California Roll, and therefore curiously exists as a Japanese response to a Western spin on their own cultural dish.

While the California roll consists of Maki Sushi featuring crab, cucumber and avocado, and with the Nori encased within the rice instead of the other way around, Uramaki may contain any measure of ingredients.

Uramaki is a rare example of fusion cuisine that has made its way back into the country of origin. California Rolls are quite popular within Japan, despite not being a Japanese invention, and while Uramaki is not as popular as Maki or Nigiri, it’s carved out a niche for itself within modern Japanese cuisine.

One major reason for its relative popularity in the West versus Japan is due to a simple cultural difference: in places like Australia, there’s a tendency to eat Sushi with chopsticks, while in Japan they’re most often considered finger-food, making the backwards encasing of sticky rice comparatively harder to handle on-the-go.

Uramaki has many varieties, ranging from foreign-originating Maki such as the Spider or Hawaiian roll (respectively filled with tuna and hot shrimp paste, and with crab and various vegetables), to Japanese Rainbow Rolls filled with a variety of multi-colored meats.

Is commonly encountered alongside Sushi, but is not, in fact, Sushi itself. Instead, it refers to tiny strips of meat or fish served by themselves, or with rice and garnishes to the side.

Sashimi is considered one of the peak tests of Japanese culture, and is usually consumed first to allow the delicate flavour first priority for eating. If Nigiri represents the test for an experienced Japanese chef, perfect Sashimi is the work of a master.

Everything from the presentation of the fish to the length and measure of the cut is tantamount in individualising each dish. The standard rectangular cut (Hirazukuri) represents the base standard for most common fish, and is roughly 1 centimetre thick. Some seafood, in particular squid, can commonly be cut as thin as 0.2 centimetres; this is also known as a Itozukuri cut, with many other sizing cuts between the two.

The meats used within Sashimi are very similar to those used in Nigiri Sushi, with the exception of finicky or runny toppings such as Roe or Egg. While there are examples of red meat and bean-curd presented as Sashimi, the most common ingredients are: 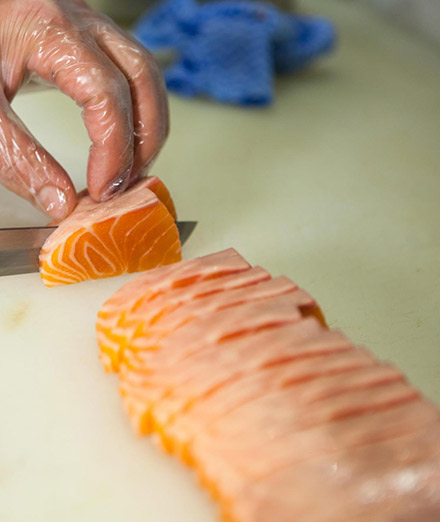 Japanese cuisine enjoys a full repertoire of communal and side-dishes to accompany your meal, and are largely salty in nature.

Edamame are deliciously salted and steamed baby Soyabeans, served whole within the pod in a similar fashion to boiled peanuts. A common delicacy, they are eaten by popping both seeds from the pod and discarding the rest. They are common as an entree, as their salty nature and the time-consuming process of eating them whet the appetite without filling it entirely. 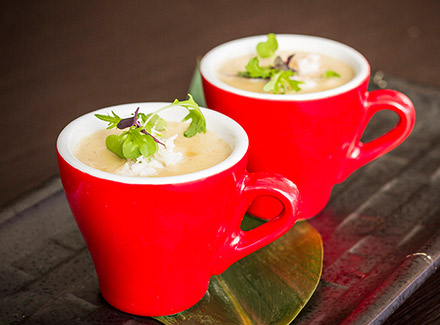 Misoshiru, or Miso Soup, is probably the most well-known side dish, and is one of the most commonly consumed sides and breakfast items in Japan. It comprises of Dashi stock made from Kelp and Tuna shavings or Shiitake mushrooms mixed with a Miso paste, made from salted, fermented soybeans. Miso Soup has a distinctive, full flavour, and pairs with just about anything in Japanese cuisine that isn’t already a soup itself.

Yakitori are strips of skewered chicken, char-grilled, salted, and covered in a sweet thick, soy-like sauce called Tare which heightens the crunchy texture of the quick-seared chicken. Stands specialising in Yakitori are common in Japan as street food.

Agedashidōfu, usually written in English as Agedashi Tofu, are cubes of deep-fried silken tofu, which are then served with spring onion, placed within a hot mixture of soy, mirin, and the same stock base found in Miso, and sprinkled with Bonito flakes. It’s a simplistic and delicious seasoning with a delicate flavour, balancing numerous subtle intricacies. It’s easy to learn to cook, but very hard to master.

Served alongside most Japanese meals are an assortment of garnishes and sauces. Some of these are nigh-universal, and fit with a huge range of dishes, while others instead are specific to individual meals.

Wasabi is an extremely hot substance, both closely related to and most commonly compared to mustard, but used on a much larger variety of food. It has a very similar flavour profile to Horseradish, and in fact, a lot of packeted Wasabi is mixed with horseradish to round it out. Australia is also the largest grower of fresh Wasabi in the Southern Hemisphere!

Soy Sauce is an originally Chinese condiment, brought over sometime in the 7th Century, and forms a mainstay of Japanese cuisine. The chief ingredient is, as the name might suggest, Soybeans. It provides an umami-like, salty flavour accompaniment which rounds out many foods.

Katsuobushi, sometimes referred to as Bonito Flakes, are tiny slivers of traditionally Tuna, but more commonly Bonito, which are dried and used to sprinkle over a variety of dishes. Combined with Kelp, they serve as the base for Miso, and contribute heavily to its rich, umami texture. They also serve a visual accompaniment to some meals, as they’re so light that the heat from food causes them to dance about on the plate.

Gari is a type of Pickled Ginger, sweetened by pickling the ginger in special vinegar, which also dyes them a pleasant and extremely distinctive shade of pink. Gari is served alongside Sushi commonly, as it counterbalances the smell of the fish, while also flushing the palate before the next serving.

To truly experience the magic of sushi and sashimi, see our master chefs in action at Kobe Jones in either Sydney or Melbourne. It’s Japanese like you’ve never had it before!